This 2-CD collection, with pianist Charles Abramovic, is a breathtaking tour de force that brings together nearly a dozen works – mostly written for Ms. Stillman – highlighting the richness and diversity of the American contemporary music scene. 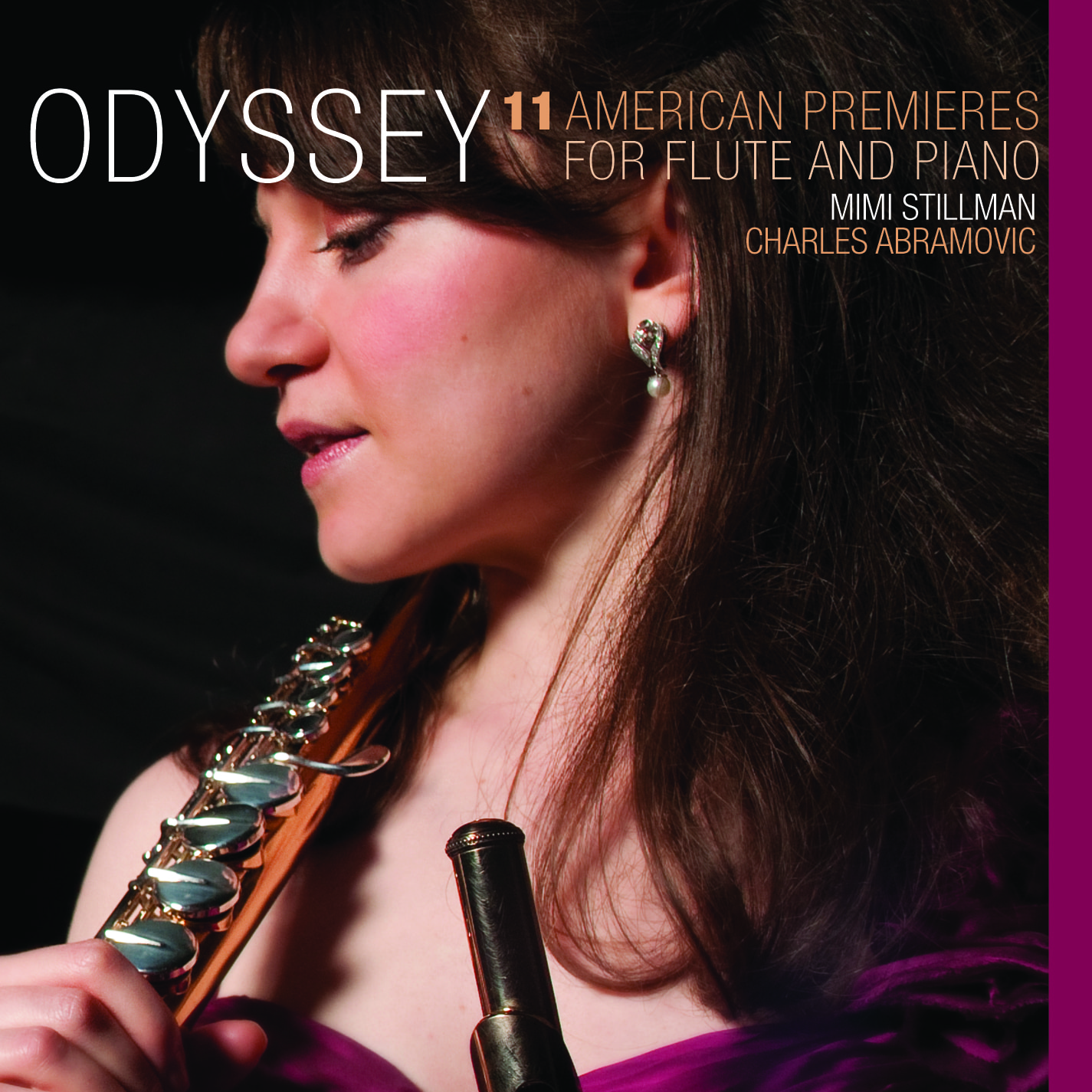 Odyssey takes its title from the work by Gerald Levinson, and more broadly, it is the adventurous journey representing the recording as a whole. There is stunning breadth and variety of musical styles from eleven composers of different compositional languages and approaches. Mason Bates’s Elements is a virtuosic essay from a composer who is as comfortable in electronica as he is as composer-in-residence for Chicago Symphony. Benjamin C.S. Boyle’s Sonata-Cantilena showcases the vocal nature of the flute in lushly sensuous writing.

Gerald Levinson’s eponymous Odyssey is a 15½ -minute monster of a piece for solo flute, a test of stamina and control. David Ludwig’s Sonata features two outer movements which are fast rides with inexorable momentum propelling flute and piano, surrounding a lyrical, introspective inner movement. Odyssey draws on music of diverse world cultures - David Ludwig was inspired by traditional Argentinean music, Katherine Hoover by Hungarian, American Indian, and Chinese music, Michael Djupstrom by a Balkan folk song. Zhou Tian references his own heritage of Chinese music. David Bennett Thomas cites jazz as an influence on his Whim for Solo Flute, along with elements of Messiaen. In her Mountain and Mesa, Katherine Hoover quotes a Hopi lullaby recorded by an ethnomusicologist. Grammy Award winner Richard Danielpour’s “A Quality Love,” Stillman and Abramovic’s arrangement of an aria from his opera Margaret Garner, is a poignantly simple song of love in a folk-like vein.

Hailed by The Washington Post as “a magically gifted flutist, a breath of fresh air” and described by Broad Street Review as “lyricism combined with introspection, fire and energy,” Yamaha Performing Artist Mimi Stillman dazzles audiences with her virtuosity, passion, dynamism, and “full-toned charisma” (The Philadelphia Inquirer). The New York Times praised her as “technically agile and imaginative in her use of color.” Philadelphia City Paper marveled at her “rock-solid chops and affecting conviction.” She has performed as soloist with The Philadelphia Orchestra, Bach Collegium Stuttgart, Orquesta Sinfónica Carlos Chávez, and other orchestras and as recitalist and chamber musician at Carnegie Hall, The Kennedy Center, Verbier Festival, and other major international venues. Mimi Stillman is a Renaissance woman – consummate artist, entrepreneuse, historian, writer, and educator. A child prodigy, Mimi was at age 12 the youngest wind player ever admitted to the Curtis Institute of Music, and at 17 she became the youngest wind player ever to win the prestigious Young Concert Artists International Auditions. Equally at home with the classical canon, contemporary music, and Latin and Sephardic world music, she has performed with Paquito D’Rivera, recorded a film score for Kevin Bacon, and was given a long standing ovation for her brilliant performance with Charles Abramovic of the complete flute chamber works of Bach. She is Artistic and Executive Director of Dolce Suono Ensemble, which she founded in 2005, a highly regarded pioneering force in the music world that has produced 23 world premieres in seven seasons.